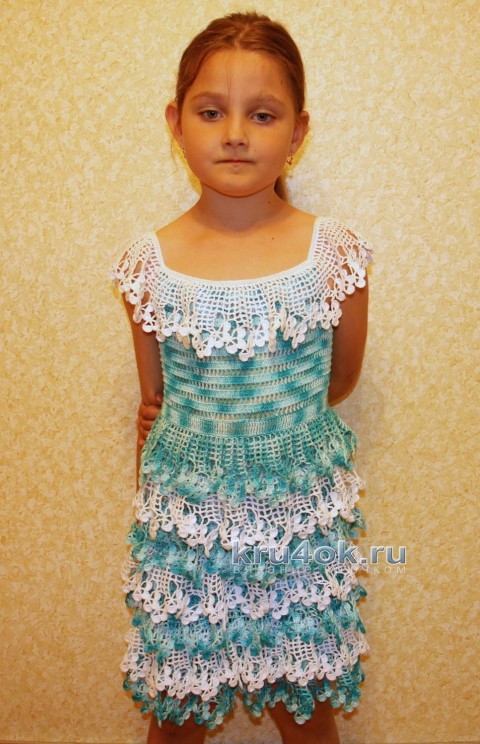 Dress for girls "Turquoise". Master class. The author's work Efimia, Andrew. Dress is turquoise melange yarns "Maxi" and white Romanian thread "of the Novel", the hook n of 0.6. Size 6 years, height 122-128. The consumption is about 350 gr. 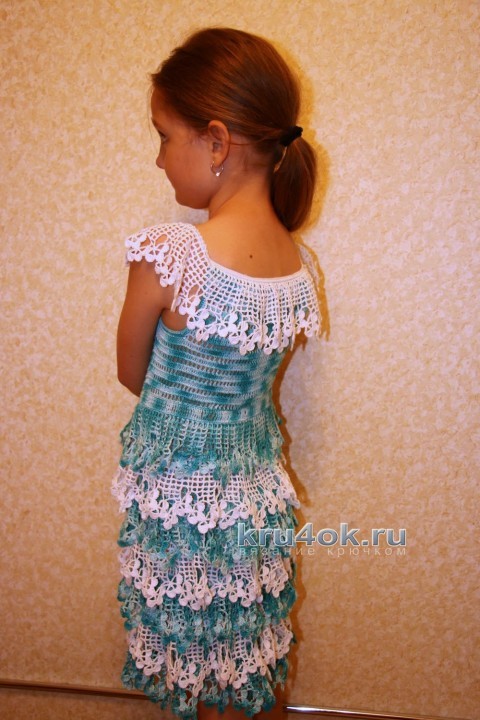 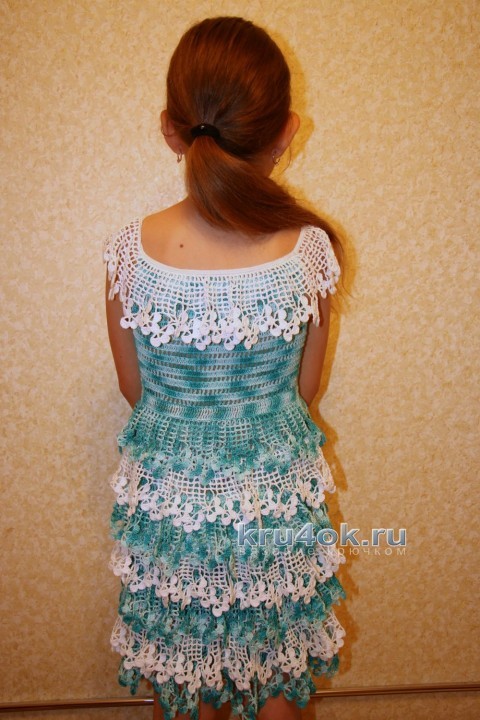 The work begins with vyvazhivanija tapes under the scheme, which included:

For the top dresses: the Eighth white-24-x rapport. When connected to the top distributed by 7 rapport for the back and the front, and 5 rapport for straps. Between the strips I knit 7 rows in filet grid columns with nakida+ air loop.After connecting to the grid 7 of the first strip loin mesh knit. So,join in a circle ready-made tape from 16 years of rapport using a needle.Along the upper perimeter of the ribbon, knit in a circle one row of columns without nakida, promazyvaya in every article strips at the St. without nakida and St. without nakida in each arc of the tape. Second row knit columns with three yo. Third row, columns without nakida. So we got a belt to the dress, in which you can put a string or ribbon, at the same time the first belt connected. The thread severing and go to the bottom of the dress. Now the loin knit mesh is the basis for the connection of the second tape of the 19-year rapport. At 1-th strip,that is,in the 1st row tbsp. without nakida, begin knitting sirloin grid of the columns with one nakida+air.loop. "Enter the hook at the same time in the article without NAC. 1st of the series and in art of the ribbon, and are finished St. with nakida. Further air. loop." From "and to" repeat until end of row.Continue knitting sirloin grid of circular rows of article with NAK.+air. loop.In the third row expandable canvas by adding intervals of 6 grid cells on a single cell. Only 18 additions, that is,adapt the grid to connect the second tape of the 19-year rapport.Knit all 7 series sirloin grid. All feeds,except 1st,before connecting to the grid and combining circle with needles,tying another series of article with NAK.+air. loop ( image # 1). 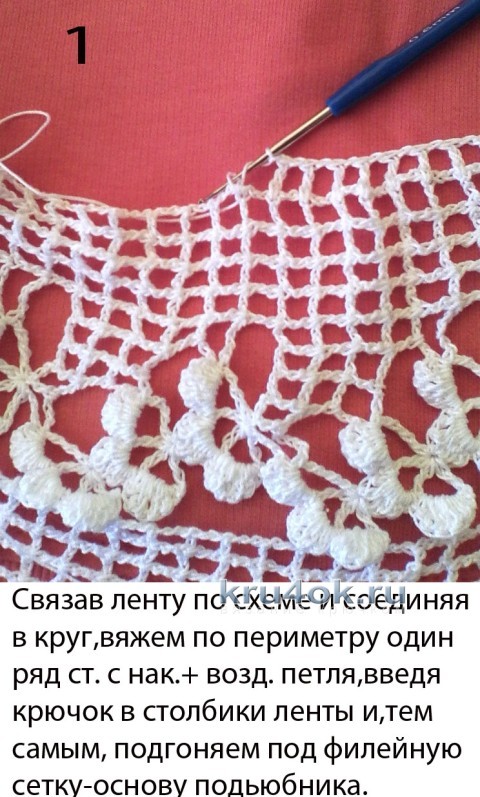 The connection of the second tape: Apply the tape to fillet the grid,enter the hook in the article at the same time with NAC. tape and article with NAC. mesh and are finished with the article NAK.+air. loop. 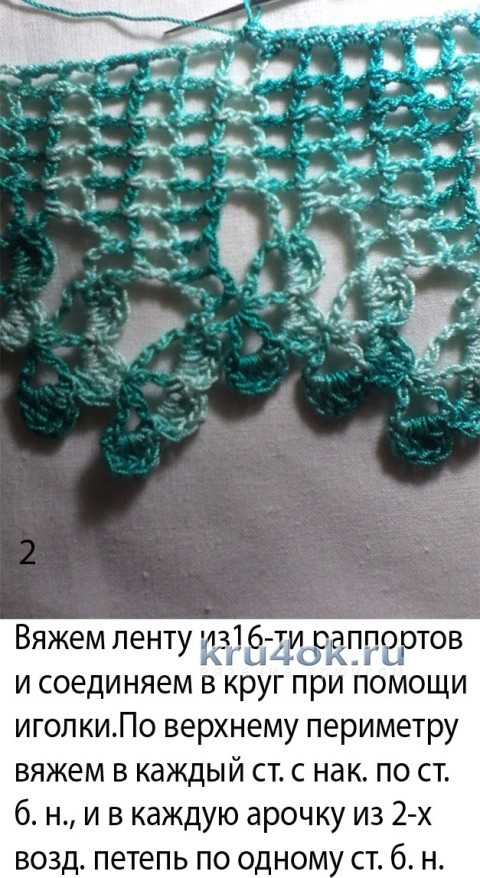 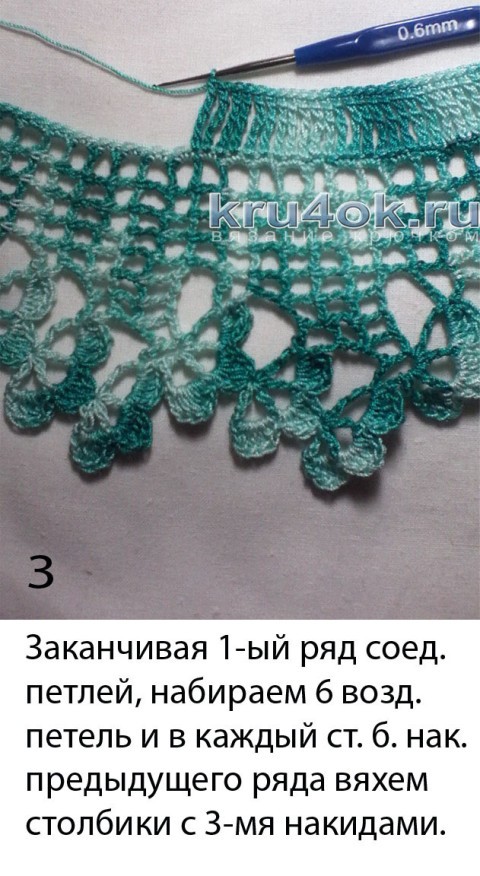 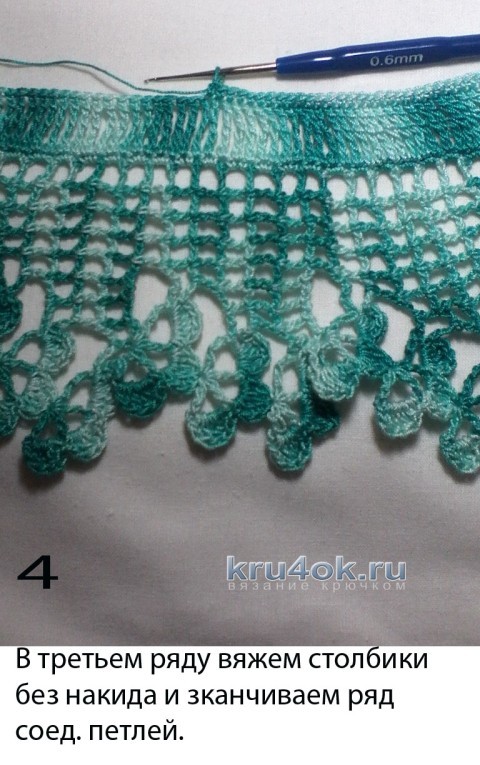 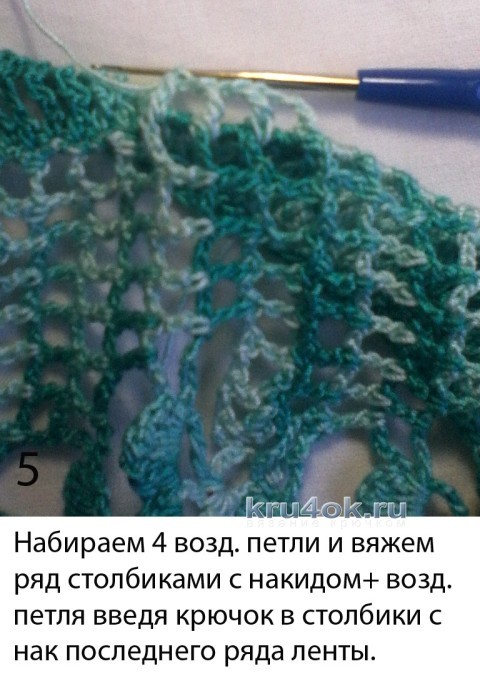 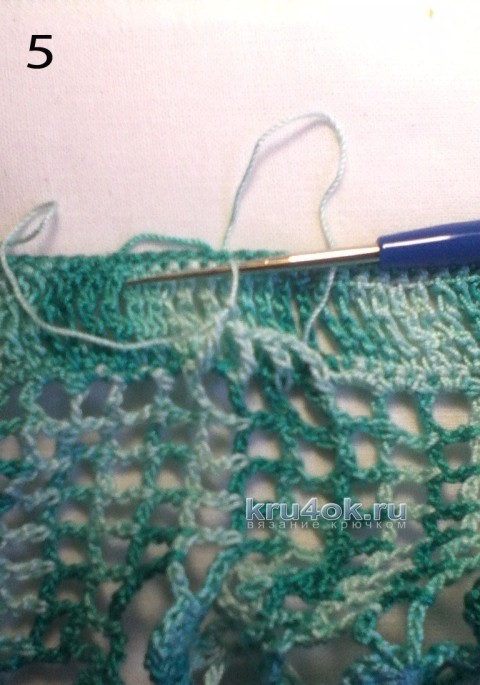 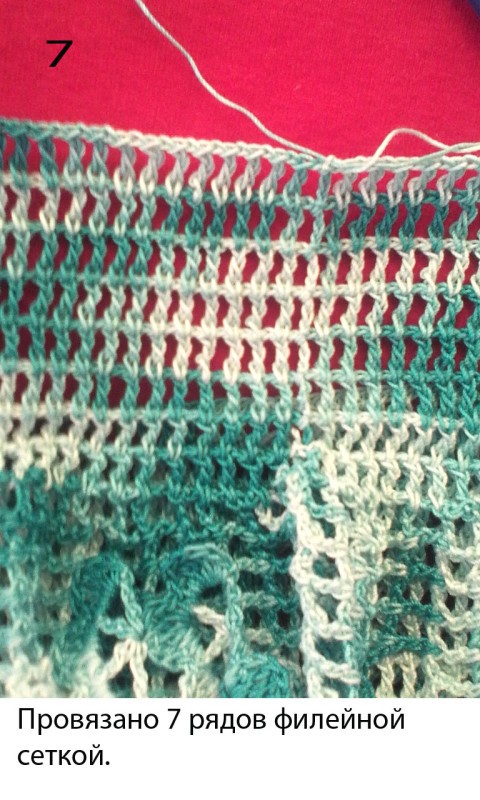 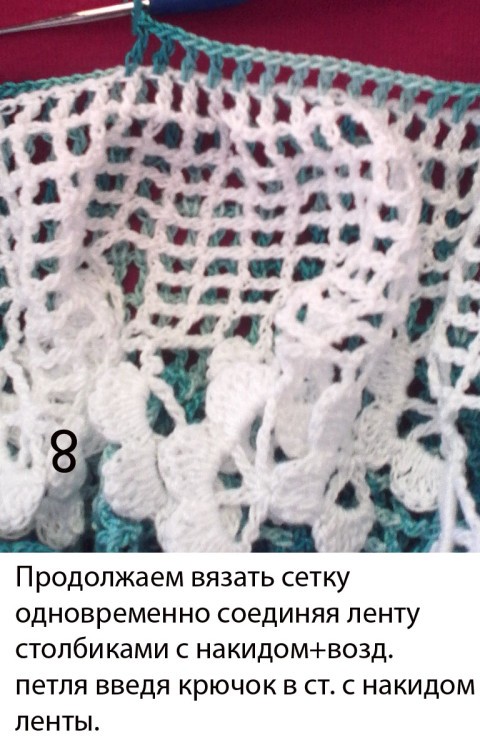 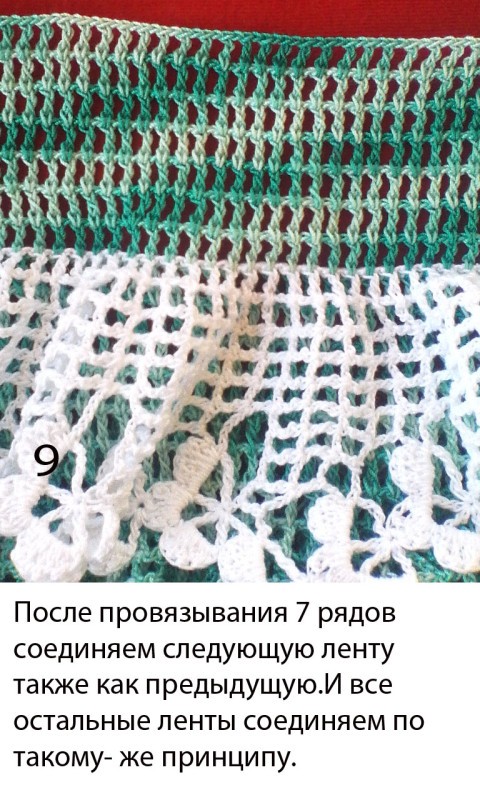 The remaining tape connected to the grid according to this same principle. Next, add in the loin grid: After connecting the 2nd tape every 19 cells in a single cell; a total of 6 cells. After 3 minutes, every 20 squares. After the 4th tape, using 21 squares. After 5 th-22 cells. After 6 th-23 cells. The seventh tape joined to a cloth article. without nakida.

The top of the dress. Starting from the belt by alternating two rows: One row of article with NAK.+air.loop. The second row of the article with NAC. Circular knit 10 rows. Then the canvas is divided into front and back distributing for 42 cells. And also define locations for the openings.

For backless knit in height, 11 rows, and for the front 9 rows, all the turning series. 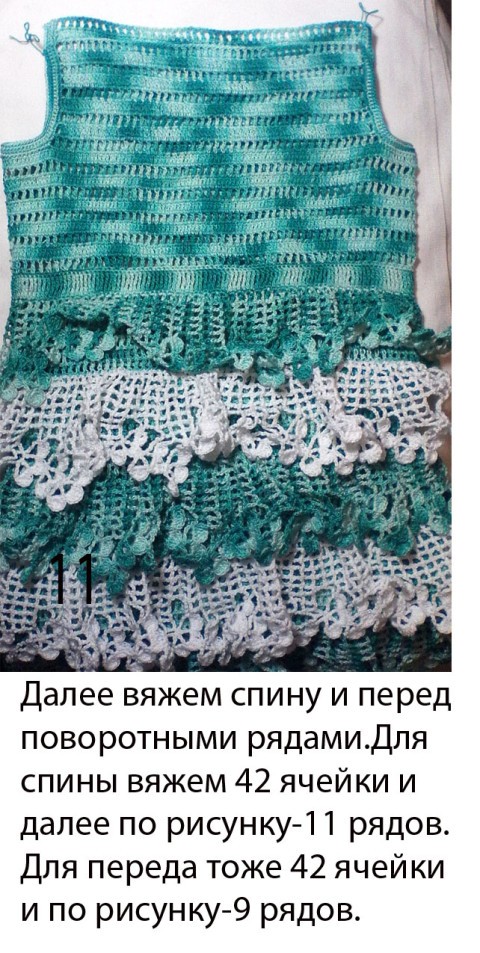 To cut for armholes, knit 3-4 rows of art without NAC. and one row of coupling loops. Further connected to the top shelves of the chain of the air. loops for shoulder, length of under 5 rapport tape. And knit in a circle single row of art. without nakida. Ready tape, eighth, and elastic width. Apply 3 mm and knit one row of columns without nakida. In the process of connecting the rubber band slightly shrinks. Then, look image: 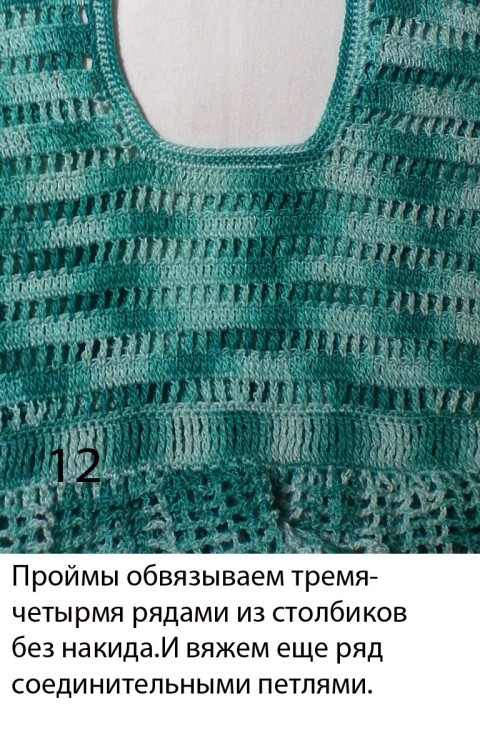 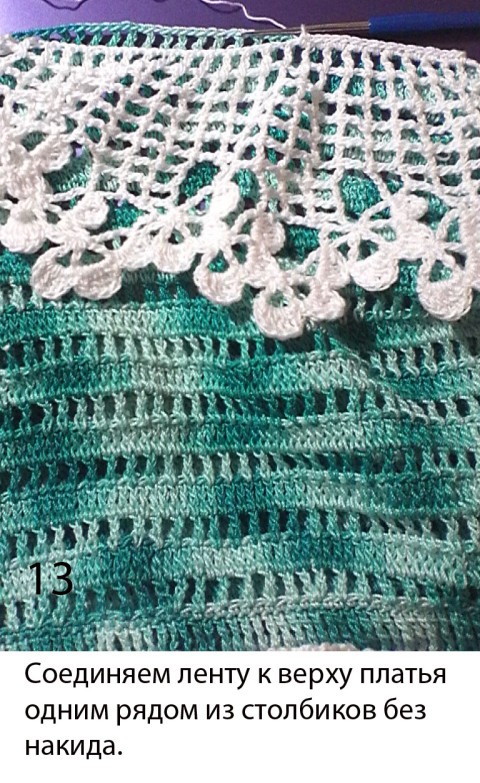 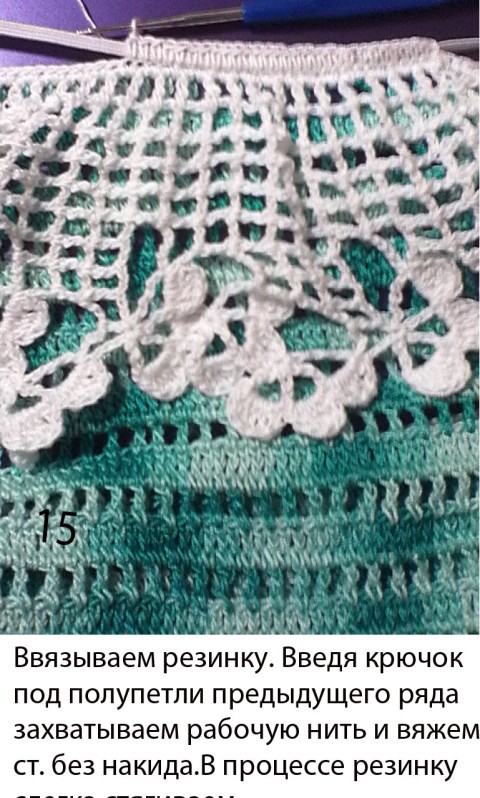