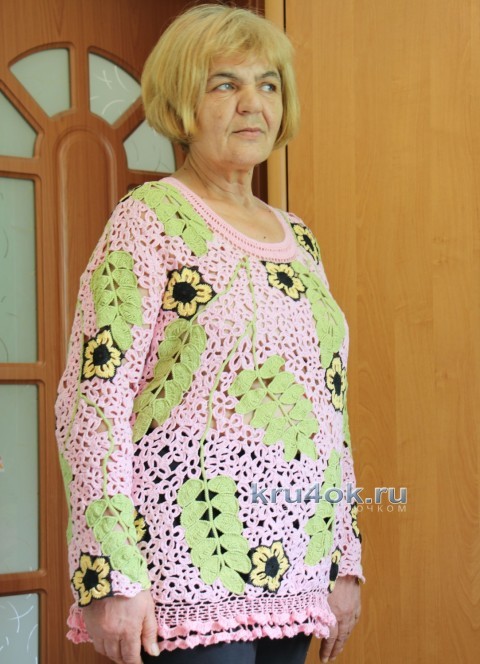 Tunic "Pink tenderness". The size of the 60th. Connected, of cotton, pink threads "Eldorado". Other colors-all thread Maxi, hook №0,75. Consumption 830 gr. Knit long 3 months. And for a long time. When weighed "a ton". And until he sold decided to show. 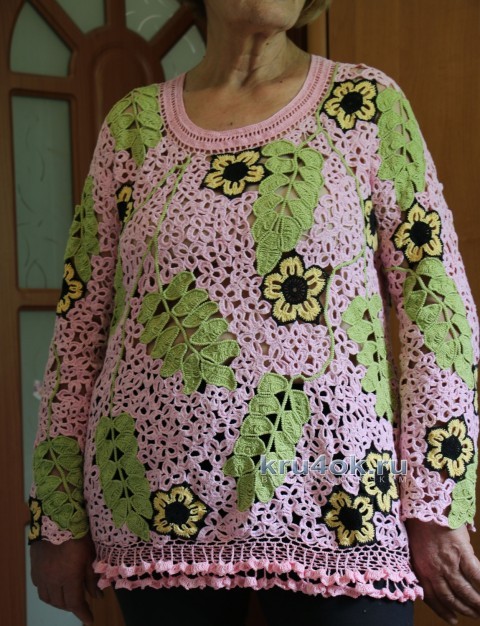 Saw the suit in the "Doublet" and everything broke. But complexion and age did not allow that. Knitting, we can say, focusing more on image, because in the "Doublet" rarely give descriptions or diagrams. But later found and similar schemes, and share with you.

The picture of the product consists of five petal flowers, leaves collected in sprigs of shamrocks and cord "caterpillar".

The work begins with pattern making. I usually sew itself to crisp the finished product in terms of size, all made the recesses and seams. Our knitted product will work without seams. The pattern made. Further, for the above schemes knit leaves and "inchworm". 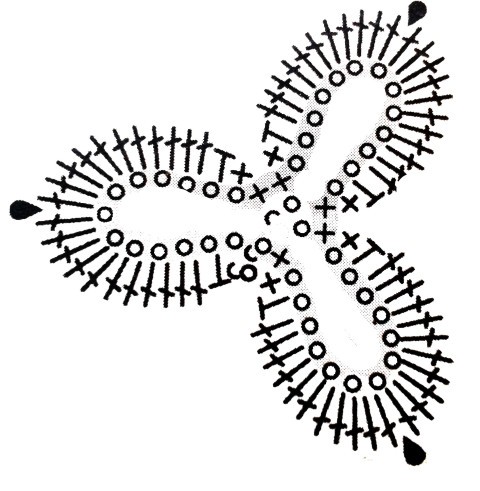 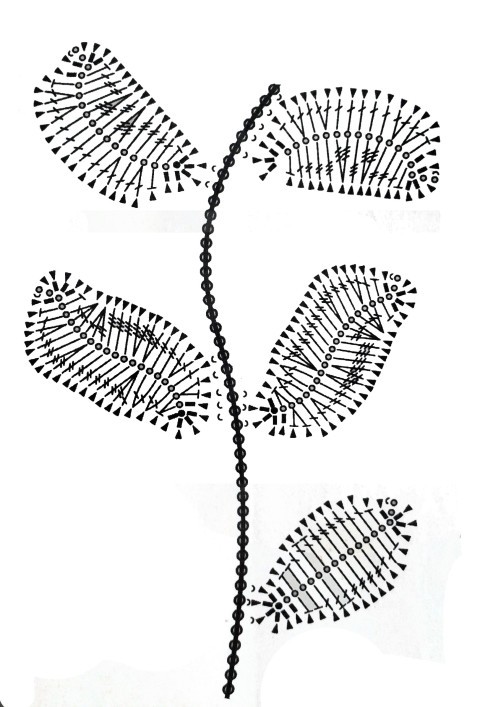 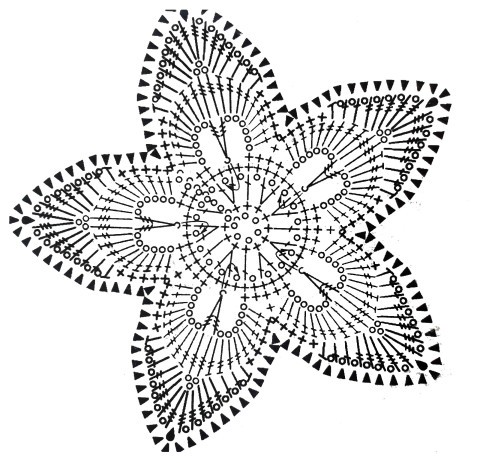 The neck laid a chain of air. loops and sewn to the pattern of bobbin thread. At the bottom of the sleeves and the bottom of the garment is also sewn a chain of air. loops. Next, focusing on the images and relying on your taste make up the composition of "inchworm" and leaves collected in twigs, placing the pattern face-down and securing of bobbin thread. 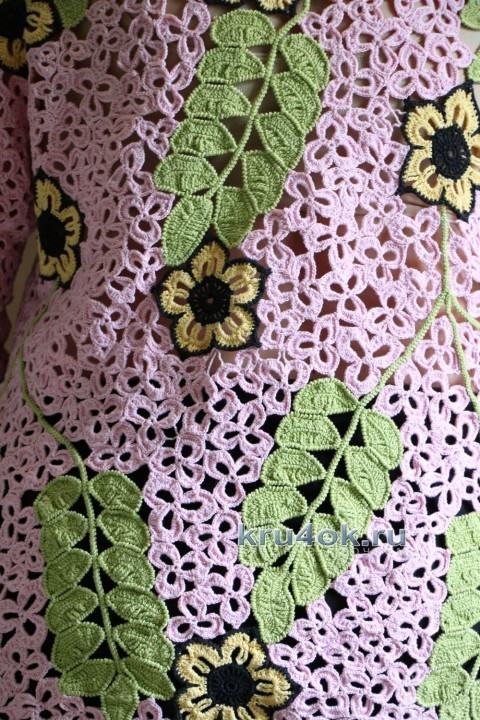 Now knit five petal flowers and spread the pattern too, face down and fixed to the pattern. But don't forget about composition. Now it was the turn of the shamrocks. Knit shamrocks, spread on the pattern,that is fixed and at the same time fill all available space. For convenience,when filling patterns motifs, use tablet of foam, pulling sections of the pattern on the screen and clipping of the tailor's needles. 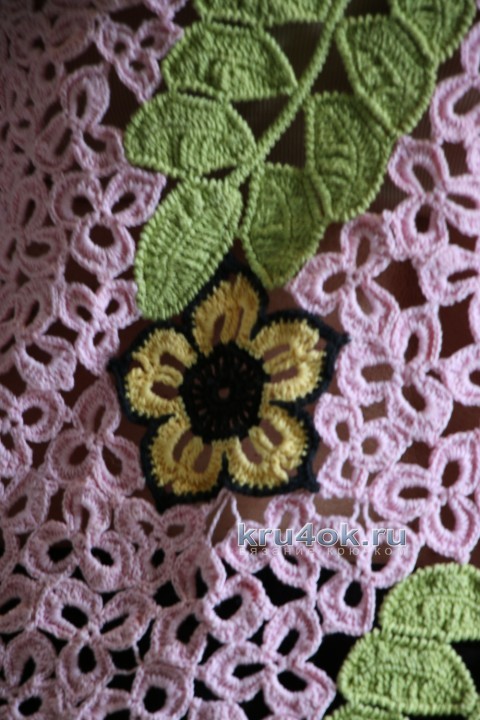 Now all the motives connected with the needle and bobbin thread in the tone thread or "floss". After connection of motives among themselves, work carefully separated from the pattern. In the air. the chain of neck recruit a single row of art. s NAK.+ two air . loop. The second row of the article with NAC. Knit circular rows of the desired width. 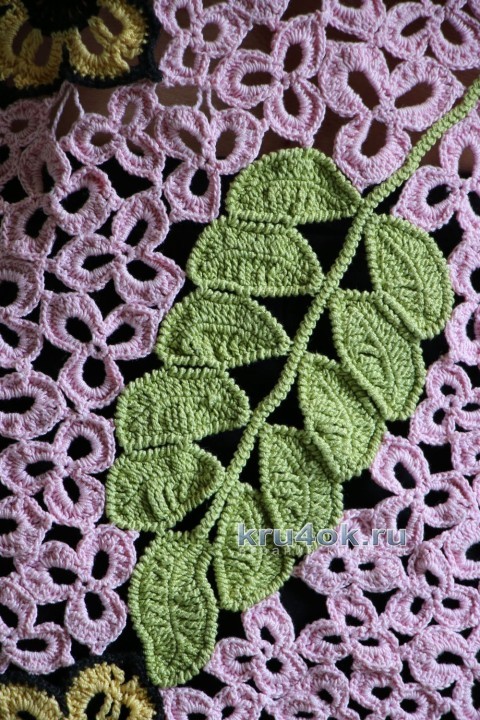 The bottom of the tunic is decorated with ruffles, which consist of 2 rows. Between them the French grid.

in previously constructed air. the chain bottom is knit one row from the article with NAK.+4 air. loop between them. Second row, start with air. chain of 15 loops. On the hook, dial 5 and are finished nacido a column in the arches of 4 loops of the previous row. We continue across the row, -5 air. loops+ item 5-d SC in each arc of 4 loops of the previous row, ending row Conn. loop a 10-second loop of recovery. Now 3 air. lift loops and arches of 5-and air. loops knit 4 tbsp. with NAK.; Pico of the 3 air. loops, 5 tbsp. with NAK. Continue across the row;-5 article with NAK.,"Pico", 5, art. with NAK. within each arc of 5-and air.loops. The number of Ruche determined by the desired length of the tunic.

PS - the Suit worn by the model-of "Doublet". 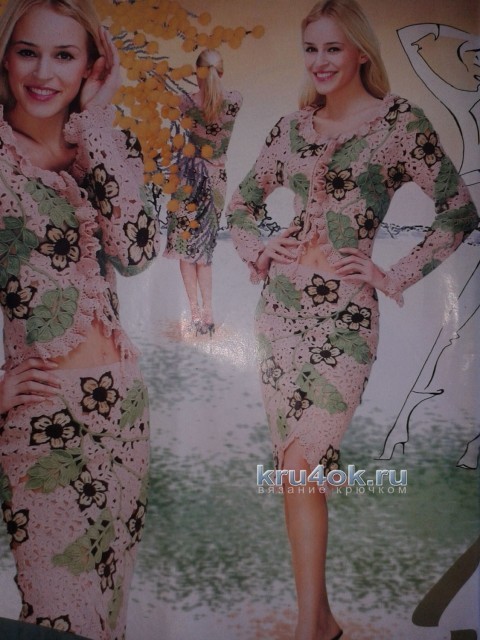