Handbag crochet with beads. The Work Of Ksenia 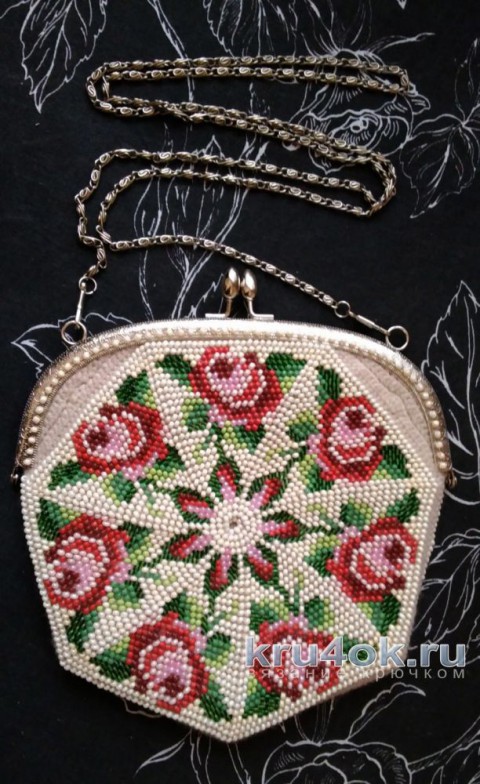 Recently, z had found a book on weaving from beads (fond of doing this in childhood), found in her section, which for me at that time was too complex, and, as an adult, decided to find out what is the difficulty. This section was devoted to crochet and knitting yarn, which is strung beads, or beads. 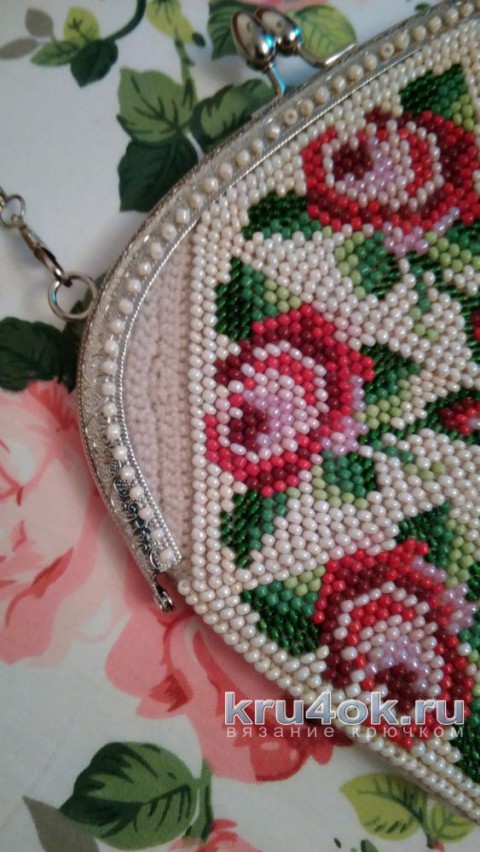 Frankly, knitting fabrics (not looped) for me remained a riddle:)) but with circular knitting managed to cope. To start, I armed myself with crochet thread and large beads for the training. From the beginning, I thought I would be able to thread the beads onto the thread, but she stubbornly didn't listen. Then I decided to follow the advice and fix to the end of the working thread is thinner thread with a needle. So much better.

For training I used plain beads, so as not to complicate their task. After a couple of rehearsals managed to understand the principle and the desire to tie any pattern. The principle of knitting circular fabric crochet with beads is simple: this is a classic knitting in a circle by columns without nakida, at the end of each wedge is increase, thus the circle increases. On the one hand get the pattern of beads, and on the other hand a single fabric. The main difficulty is in stringing beads is important not to make mistakes, because otherwise, you will have to either cut the thread or to unleash the already related rows.

To get a flat canvas, you need to do at least 7 wedges, so each row will increase by 7 beads. Thread the beads you need from the last row and right to left, it's best to knit from not all canvas, for example, for 5 rows. If we need to link with 1 on 10 number, string a bead should start with 10 rows, going over the drawing with the right side to the left. In the end we will be those beads, which will begin knitting. In the diagram, an arrow indicates the direction. 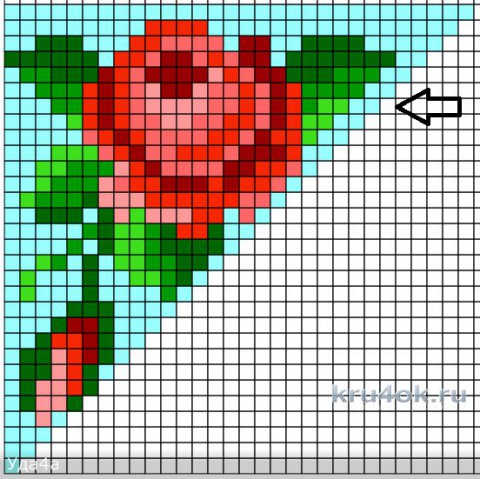 The knitting is as follows: the hook passes through the upper wall of the loops of the previous row, yarn pulls the bead, the hook captures the working thread behind the bead and stretches the loop, the new loop promazyvaetsya. This method of knitting is called in Russian, there are English method, but I, as a single sheet, still not sorted out... so if you have got associate training track (definitely need to work out, beads — not a cheap thing, it is better to try on a small, than to purchase the total quantity to be disappointed in case of failure), you can start drawing. 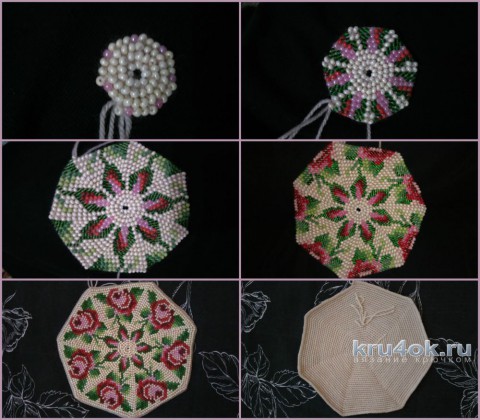 I found a diagram with rosettes, beads picked myself, the colors will not write, so as not to confuse the creative approach, the size — took 8ku of the company Zlatka. The base color took about 5 tubes of 40 g, the other colors about 2 tubes of 40 g. the Thread took a "Children's novelty" hook No. 1. After all the necessary beads are threaded on, begin knitting.

Are finished 7 of the stitches with the beads, fasten them in a ring, then knit in a circle: 14-21-28-35 etc. For mid-better to take small identical beads, because the beads are very tight to each other. Need to knit a medium, not tightening and not relaxing thread. If you link two pictures and join them together and make a purse. Can you describe your experience in creating it, but just say: this is my personal experience, I in no case do not claim that it is the only correct and he should follow him. Maybe someone else's experience will be more convenient and proper, so better to look for several of these descriptions.

That's what I did: selecting the clasp (metal buckle for bags), I realized that it is a slightly different shape than my future bag. In this regard, had to build up several ranks on the two wedges on each half. After connecting them with 4 sides (3 graft wedges left for sewing clasp ), found the fabric for the lining, cut two parts and stitched them together on the machine, then put the pocket from lining fabric between the two halves and stitched 3 free sides manually. Then attached a clasp to the edges of handbags, and began to sew. Sewn not over the edge, I'm clipping the stitch using the beads. The size of the clasp, which I took, 22.5 cm Thus, it turned out knitted purse bead. 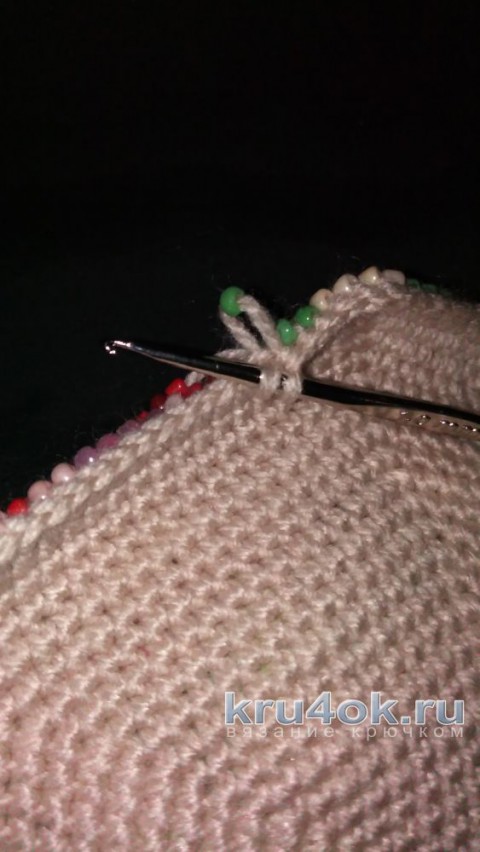 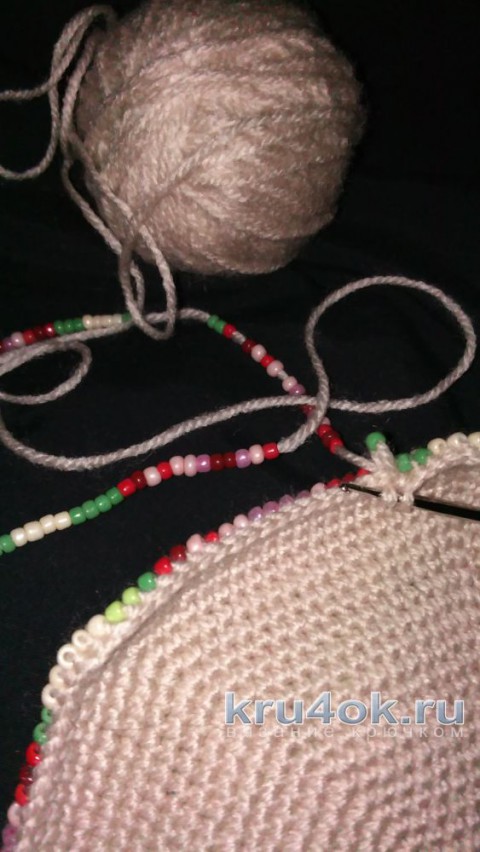